The Atlanta Festival Academy is the first international 9-day classical music festival being hosted in the Southeast, attracting young musicians, instructors, and performers from around the world.

The festival is packed with master classes, lectures, workshops, as well as private lessons, chamber music and orchestra coaching by world renowned teachers from Asia, America, and Europe.

The festival will culminate with two concerts highlighting works by Mendelssohn, Dvorak, and other composers.

Join us on July 27th at the Sandy Springs Performing Arts Center for “Shining Stars,” a fundraising concert for the 2019 Atlanta Festival Academy

The concert will feature young musicians from the Atlanta Festival Academy, including winners of the international competitions from China, Singapore and United States.

The ticket price includes a black-tie dinner event before the concert, hosted by the generous donors of the Atlanta Festival Academy.

The Finale concert will feature 12 year old violin sensation, Chloe Chua as soloist, and showcase two orchestras of AFA on the stage of the Byers Theater at Sandy Springs Performing Arts Center.

The Finale Concert will be held on July 30th at the Sandy Springs Performing Arts Center. 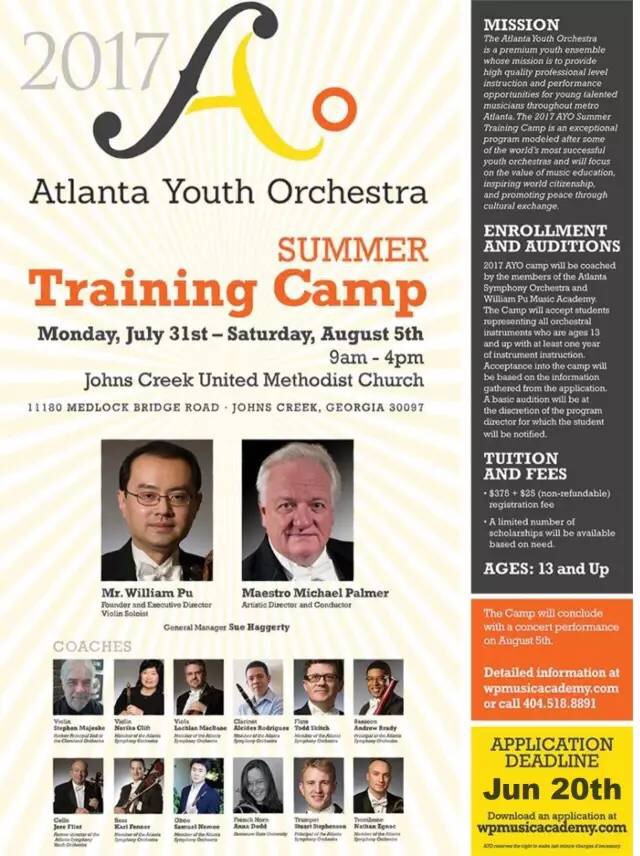 The Atlanta Youth Orchestra is a premium youth ensemble whose mission is to provide high quality professional level instruction and performance opportunities for young musicians throughout metro Atlanta.  AYO is an exceptional program modeled after one of the world’s most successful youth orchestras and focus on the value of music education, inspiring world citizenship, and promoting peace through cultural exchange.

Led by Maestro Michael Palmer, Conductor and Artistic Director,  AYO will provide each student with the opportunity to experience group orchestral instruction, sectionals, and coaching by some of the finest metro area professional musicians whom perform with the Atlanta Symphony Orchestra.

AYO accepts all all instruments.

We serve the local Atlanta area community by providing the best music education and enriching the lives of young students.