Hyesul Shin was born in Incheon, South Korea. She started the violin when she was 5 years old. She continued the violin until she was 13 when she switched to major in viola. She was accepted at Incheon Art High School as a viola major. She accomplished the Bachelor of Music in Viola Performance at the University of Chung-Ang. She continued her education and received her master’s degree in Viola Performance from University of Kansas, studying with Peter Chun, where she earned the honors for her accomplishments.

Hyesul Shin won the second prize as the winner of the competition in Seoul National Symphony Orchestra. She has performed as a soloist at Hyup String Ensemble (2004-2005), Chung-Ang string orchestra (2009), and Viola Festival in Korea (2010). Also, she performed as first chair in KU Opera Orchestra in Eutin, Germany in 2011. She was the member of Bordin Quartet from 2008 to 2010 and participated in many different music festivals. 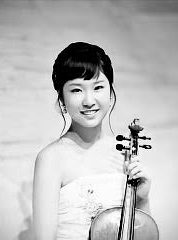